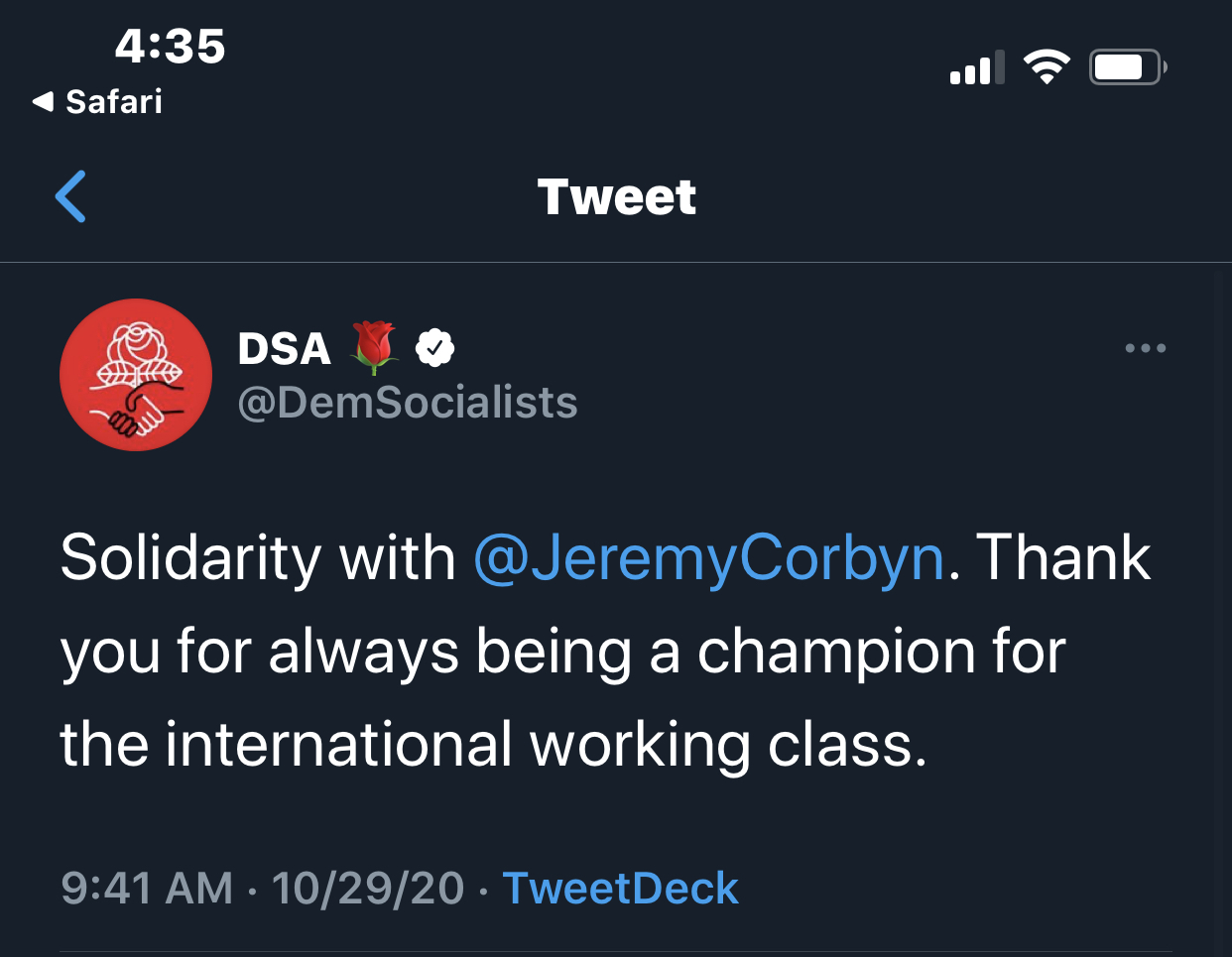 It is profoundly disturbing to see the Democratic Socialists of America support and claim “solidarity” with one of the world’s most recognized and notorious antisemites. After many years of Britain’s Jews living in fear, in a period during which more than half of them actively considered leaving their country because of his rise to power, Jeremy Corbyn has finally been suspended from the British Labour Party.

Anyone who cares the slightest bit against the scourge of rabid and violent Jew-hatred plaguing our country and the world would celebrate this outcome.

Jeremy Corbyn consistently downplayed and ignored anti-Jewish hate in the Labour Party and was suspended for decrying a report that objectively shows how unchecked this bigotry was under his watch. More than that, as Labour’s longtime leader, he himself expressed his antisemitic and anti-Zionist views so frequently and unashamedly that Jews––founders and previously staunch supporters––overwhelmingly abandoned their political and ideological home.

DSA should be ashamed of their prior association with an individual who worked hard to mainstream antisemitic, anti-Zionist conspiracies on the left that marginalized British Jews, as should American leaders who previously expressed solidarity with him, including Representative Alexandria Ocasio-Cortez, U.S. Senator Bernie Sanders and so many others. Yet, instead of expressing remorse, we have seen either silence, or outright doubling down.

It is truly shocking and simply unconscionable to see how disposable the Jewish community is to some of these political forces.

Corbyn is a cautionary tale about what happens when antisemitism is not taken seriously. It destroys relationships, movements, and even entire political parties. We cannot stand by when we see Corbyn’s dangerous actions normalized by any American political leadership, nor can we ignore the danger that these forces present to the urgent success of our movements for justice.

History has shown the violent consequences of pure socialism and communism on Jewish communities, murderously decimated when these political systems were inevitably corrupted. While Zioness believes strongly in a systematic and comprehensive approach to addressing wealth disparities and income inequality in our country, anyone working to advance these systems who is unwilling to address how they end up targeting and discriminating against Jews, is, quite simply, endorsing and perpetuating antisemitism.