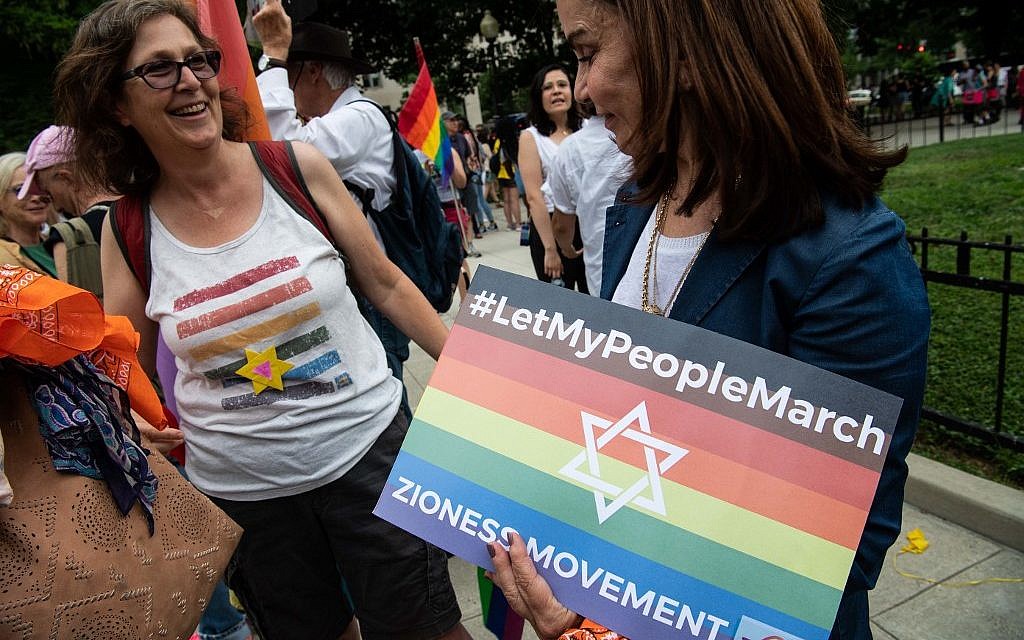 After the killing of George Floyd at the hands of police in Minnesota last year, 27-year-old Zach Schaffer joined the Black Lives Matter protests in New York, locking arms with peers, a sign reading “Jews for Black Lives” around his neck.

Schaffer, a Jewish communal professional, describes himself as a staunch progressive and Zionist — two things that many believe are contradictory.

For the past several years, however, some pro-Palestinian activists have promoted the idea that Zionism is in conflict with social justice, putting progressive Jews such as Schaffer in an increasingly uncomfortable spot. In 2017, the Chicago Dyke March organizers kicked Jewish participants out for displaying pride flags containing the Star of David. The Women’s March in 2019 also sparked controversy, with some organizers claiming there was no room in feminism for people who support Israel. The same ideas have ramped up on social media since the mid-May conflict between Israel and Hamas in Gaza.

The increasing alienation of liberal Jews from progressive spaces is what led Amanda Berman, 35, to found Zioness in the summer of 2017. “This has been going on for a long time, it’s just more in your face now,” she said.

The past few weeks, Berman believes, have “woken up a lot of people who felt like they could close their eyes to the antisemitism within our political spaces and justice movements.”

“We don’t have the luxury of ignoring it,” Berman said. As a result of the recent anti-Israel and antisemitic rhetoric appearing on the left, four new chapters of Zioness are now being launched across the country.

According to Berman, some Jewish organizations are also to blame for the exclusion of Zionists from progressive struggles, as they “have been telling the progressive movement that it’s okay to impose litmus tests on American Jews and to make us qualify our Zionism or our support for Israel and to constantly frame Jewish liberation as being opposed to Palestinian human rights which, of course, it isn’t.”

Berman and her organization vow to continue showing up for the progressive movement because it’s “the ideological home of American Jews,” she asserted. She echoed Schaffer in saying that support for social justice in America shouldn’t be transactional.

“When American Jews stand up for the LGBTQ communities, it’s because there are Jews who are LGBTQ; when we show up for immigrants and refugees, it’s because every Jew is an immigrant or a refugee,” Berman said. “We will continue to be in these movements.”

Despite the pushback in progressive spaces, Schaffer also made clear: “I do not condition my solidarity with other communities based on how they feel about me. I show up where I show up because I think it is the right thing to do.”

Don’t let them see our Star of David

On social media, 36-year-old actress Daniella Rabbani Sirkin has often advocated for social justice causes. On her Instagram page, Rabbani Sirkin often shares pictures of her two young children: Four-year-old Ness and one-and-a-half-year-old Paz. Working as an actress in New York City, she has some 16,000 followers on the platform.

On May 21, she posted a blue tile as a symbol of the struggle against antisemitism. But, as anti-Israel and antisemitic content started trending on social media over Operation Guardian of the Walls, she decided to make her profile private.

“The inflow of hate was crazy,” Rabbani Sirkin told The Times of Israel. “This is [supposed to be] an app for kitty cats and pretty food plates.”

Antisemitic posts have surged online in the past weeks. An analysis of Twitter conducted by the Anti-Defamation League (ADL) following the recent escalation in Gaza showed more than 17,000 tweets using variations of the phrase “Hitler was right” between May 7 and May 14, 2021.

But the wave of hatred has also unfolded offline. The ADL received 193 reports of antisemitic incidents nationwide in the week after the crisis began, up from 131 the week before.

With alarming frequency, videos are being released online showing pro-Palestinian protesters beating Jewish people on the streets, intimidating Jewish diners at restaurant terraces, and burning Israeli flags in New York, Los Angeles and other large cities. Overall, the ADL has recorded a 75 percent increase in antisemitic incidents across the United States since the end of April.

Rabbani Sirkin said she has taken such hate into consideration in her everyday decision-making recently, something that she describes as “life-changing.”

“There was a rally in support of Israel and I didn’t attend because I was scared,” she admitted. Two weeks ago, while walking her daughter in a stroller, she felt similar fear. After giving the baby a toy to play with, Rabbani Sirkin realized that the toy, a rattle, had an Israeli flag painted on it.

“I felt scared, really scared, that this one-year-old baby was making a political statement that is being misconstrued,” she said. When the rattle fell out of the stroller, Rabbani Sirkin and her husband “ran to pick it up with a little too much intensity.”People hold signs blaming Hamas for recent violence at the pro-Israel Coast to Coast rally near the World Trade Center on May 23, 2021, in New York City. (Courtesy Alexi Rosenfeld)

ADL senior director of international affairs Susan Heller Pinto has worked at the organization since the time of the Oslo Accords in the early 1990s. She has monitored antisemitism through major conflicts including the Second Intifada, the Second Lebanon War and Operation Protective Edge in 2014. But the recent outburst of antisemitism related to Operation Guardian of the Walls follows “different dynamics” than what she has seen during previous conflicts.

“Offline, the antisemitic incidents targeting the Jewish community we saw in 2014 were mostly in Europe, where synagogues and Jewish institutions were targeted as an expression of criticism of Israel,” Heller Pinto told The Times of Israel. “We’ve always seen antisemitic placards or rhetoric at anti-Israel demonstrations in the United States, but I don’t think that we have seen the actual level of physical incidents and violence that we are seeing now.”

As for recent online hate against Jews, Heller Pinto said the combination of the lack of nuance on social media, its availability, and its prominence in our lives can be fertile ground for antisemitism.

“The Israeli-Palesitinian conflict does not easily lend itself to one meme or to a few words,” she said.

Built-in algorithms, she also believes, are exposing Jewish users to such hate at a younger age than ever before.

“In prior conflicts there has always been anti-Israel advocacy and antisemitism but for most young Jews they didn’t really get exposed to that until they were maybe in high school, but mostly in college and beyond,” she said. “Now you get nine-year-olds with a Snapchat or Tik Tok account and it’s coming on their feed.”

Heller Pinto also pointed out that much of the conflict is now being examined through an American prism of social justice, which “simplifies it into two pictures, and it’s hard to refute on social media — you need a more elaborate response than you can give with a meme.”

Schaffer believes that because antisemitism is “grounded in a mythology of Jewish power and the American left today sees the world through a prism of power,” many view the State of Israel as a powerful oppressor.

“The traditional way that Americans — especially American progressives — understand persecution and oppression makes it harder, not easier, to understand antisemitism and the Jewish people,” he said. “When you see the world through a lens of oppression and through a lens of privilege or white supremacy, it is very hard to see how antisemitism operates in its full breadth and how it affects the Jewish community.”

Looking at the events in Israel through the American lens of social or racial justice “flattens Jewish history and the Jewish experience and ignores why Jews were in the Diaspora in exile in the first place,” Berman added.

“To use progressive language, it’s actually a sort of colonization of the mind: I understand the world through my Western American frame and so I’m just going to apply that frame to the entire world without any context or understanding,” she said.

For some progressive Jews, this lack of nuance is perplexing. “I’m so progressive-hearted and genuinely liberal, and I actually don’t see how being pro-Palestinian means I don’t believe the Jewish state has a right to exist,” said Rabbani Sirkin.

Support behind the scenes

Last year, while Schaffer participated in a Black Lives Matter action, a group of individuals who knew of his Zionism tried to get him to leave. Before he could say anything, another activist in the crowd spoke out.

“I don’t know much about Zionism but I know a lot about Zach,” he recalls her saying in his defense, adding that Zionism couldn’t possibly be racism for that reason.

“That’s what solidarity looks like,” he said.People gather to show support at the pro-Israel Coast to Coast rally near the World Trade Center on May 23, 2021, in New York City. (Courtesy Alexi Rosenfeld)

While Schaffer agrees that there has been “a lot of silence around antisemitism,” the challenge is “not necessarily that no one cares about the Jews” but rather that “no one understands the Jews or antisemitism and many Jews struggle to articulate a compelling and cogent definition of Jewish identity and Jew hatred.”

According to Schaffer, forging relationships is key and helps educate others about the Jewish people’s history and identity.

“Antisemitism is a part of our society, it is part of our DNA, it is the inheritance of humanity,” he said. “I find that when we talk about antisemitism in a way that progressives can understand, they can begin to understand it — but it takes a serious relationship.”

When we talk about antisemitism in a way that progressives can understand, they can begin to understand it — but it takes a serious relationship

Although some progressive Jews have felt alone in their struggle against antisemitism, Berman stressed that “it is not true that no one is showing up for us, it’s that the showing up has been behind the scenes.”

Since the start of the conflict, she has received much support from non-Jewish allies in the form of messages and phone calls.

“I think there has never been a more important time to show up proudly as a Jew,” Berman said. “I don’t want anyone to put themselves in danger obviously, and people need to read the room […] but being Jewish but not visibly Jewish will not protect you in the end.”

At the ADL, Heller Pinto said the main concern these days is Jewish security in the face of violent antisemitism. In the long term, however, the question is “how do you provide context and explain the Jewish connection to Israel and the existence of the Jewish state with all of its flaws, while also providing space for criticism of Israeli policies.”

“I think that pro-Israel voices are very good at preaching to the choir but we need to do a much better job in explaining and educating some fundamentals of the Jewish connection to Israel — whether we agree on policies or not,” Heller Pinto said.

Danielle Ziri is The Jerusalem Post’s New York correspondent. She covers the American Jewish community and the United Nations among other things in the Big Apple.